“Buonissimo!”  (Italian words are so fun to say!)

My whole life, I had always wanted to visit Italy. From photos I had seen, to stuff on TV, to everything I had heard about Italy – I was fascinated by all of it. Something innate in me made the thought of its pasta, wine, historical & scenic views, and even the language feel comforting.

Then the idea of an Italian grandmother in the kitchen is something of its own. You can’t beat that kind of comfort. Although it might be stereotyping, I have no shame in believing that Italian families have it the best. I would love for my staple food to be pasta and for the weather to flourish vineyards. They also take things slow in Italy, unless you’re driving with them, which is when things can get crazy. Nonetheless, I finally got to experience the culture and visit Italy’s capital, Rome. For the four-day trip, I was accompanied by Bae, Becky, and Dan.

When in Rome, do as the Romans do. The talk about adapting to local customs. I had no problem doing this there. I ate traditional Roman cuisine, and if it wasn’t for all the walking, I’d weigh 10 kilos more by now (that’s just over 22 pounds for my people back home). Cheeses, breads, meats… the epitome of foods which taste awesome but are terrible for you. That didn’t stop me from having Spaghetti alla Carbonara for 4 days straight.

Traditionally made with Guanciale (a salty, cured Italian meat from pork cheeks), eggs, pepper, and Pecorino Romano or Parmesan cheese.

A slightly different version made with Rigatoni

One of the restaurants we ate at was called Trattoria Vecchia. They had a couple specials on the menu that got flambéd in either a Pecorino Romano or Parmesan cheese wheel. The cheese is smoothly melted and coats the pasta generously. 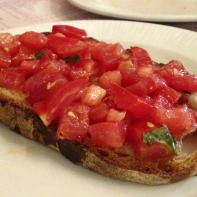 Cognac is poured into the cheese wheel, lit up, and then it melts a cheese jacuzzi for the pasta.

Pasta is stirred inside until well coated in cheese. 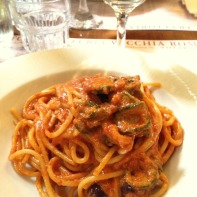 Many resources said to book tours in advance for attractions like the Vatican Museum. Glad we did this and got to pass the extremely long line for buying tickets at the door. I found out that the Vatican City was its own country and was heavily guarded. Made the whole experience feel very sacred.

The Vatican Museum was full of sculptures, paintings, tapestries, history, and biblical-everything. It felt like taking a walk through the bible.

St. Peter’s Cupola, the dome, was a trek. Never-ending stairs led us up to the very top, where we had a panoramic view of the Vatican City. The hallway of steps winding up the dome was extremely narrow. Claustrophobic for some, I imagined how awful it’d be for someone to get too tired and need to get back down. The humidity in some parts of the hallways were almost unbearable and it wasn’t even summer yet. Regardless, totally worth it when you get to the top. 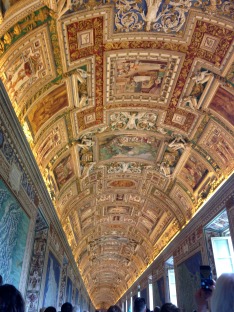 Phenomenal displays of art throughout the Vatican 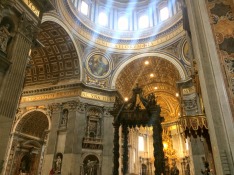 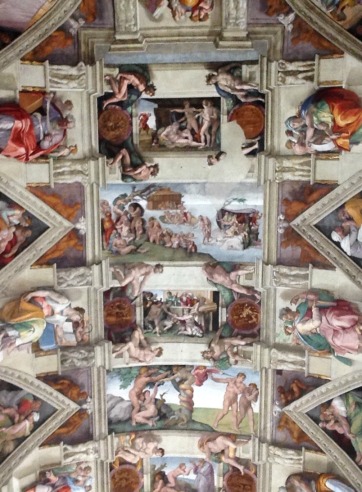 Creation of Man ceiling painting by Michelangelo in the Sistine Chapel. Michelangelo painted the ceiling a little against his will. He did it for Pope Julius II but was quoted to have said, “I am not a painter, I’m a sculptor” and he left several proofs in his paintings to show he didn’t enjoy himself. Imagine if he had given up. So inspiring.

After 4 hours of the Vatican and St. Peter’s Basilica, we had a late lunch of lasagna (Becky’s is pictured because again, I couldn’t wait to dig into mine) and pizza. This place had a slightly thicker pizza crust compared to another one we went to. Both kinds were good, even though I prefer the thicker crust. You know it’s good when you see those wood-fire oven marks.

The Colosseum was another attraction we booked in advance. Admittance to the highest level (the Belvedere) and the underground level was only possible with tour guides. Even though I tried booking about 2 months in advance, all the English tours were sold out so I had to book a tour in Italian. I learned that others have used this trick and it happened to work out.

This is now one of my favorite historical attractions I had ever been to. I envisioned how it would be in the past… walking in to be a part of the audience… to watch a show of gladiators and wild animals – man against beast. It probably would’ve been epic. The arena and the stone structures used to build it were of great magnitude.  It made me feel like a small spectator on the grounds of such a manly and ancient sport. The Colosseum, afterall, was the largest arena built in the world. 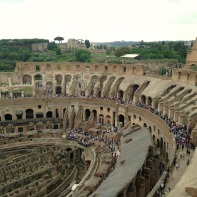 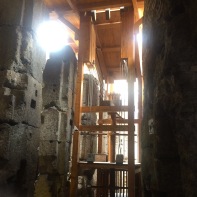 The Trevi Fountain was a charming feature. It was crowded (again, wasn’t even summer yet and look at all the people) but we had to partake in the tradition of tossing a coin with your right hand over your left shoulder. Some people would make a wish, while other rumors said this tradition guaranteed your return to Rome in the future. I read that at the end of each day, the coins were collected by the city and went to charity. Every single day turned up around €3000 in coins! 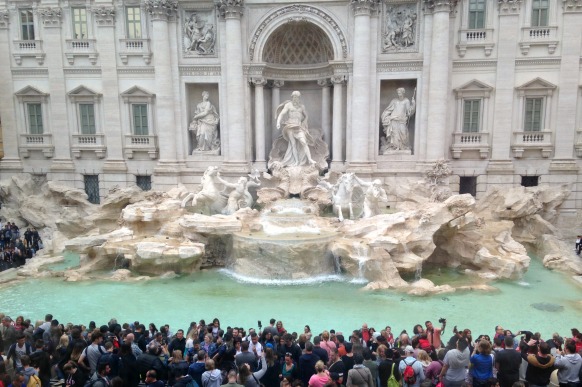 The Spanish Steps. Only named this because of its location near the Spanish Embassy. I didn’t think there was anything special about the steps but it made a nice resting point.

Rome is a city that banned all euthanisation of animals. We visited a cat sanctuary that was on an ancient, sacred ground called Torre Argentina. It was actually where Julius Cesar got stabbed by his rival, Brutus.

There were around 150 cats and it was awesome to see that they were so well-cared for that they didn’t care to leave the premises. For 7 days a week, volunteers took care of them and helped put them up for adoption. Interesting that this photo doesn’t show any visible cats, but there were definitely tons of them upon entering the other side, where the adoption office was located. How cool is this site for cats to roam freely?

In conclusion, early May was an ideal time to visit. Less crowds, cheaper accommodations, and good weather (it rained hard for about an hour but was great otherwise – and the rain only called for another “Wine o’clock” as Becky would say). Speaking of wine, I never documented the different wines we tried, but I can safely say all the house wines were fantastic. You can’t expect less in Rome. The locals were so nice and I couldn’t get tired of hearing the language.

On our last day, we finally got to try some gelato. Creamy, rich, decadent. Great way to end the trip. Until next time, addio Roma!